Out of the nearly 200 animals at America’s Teaching Zoo in Moorpark, there is one particular four-legged resident that stands out not only because of his extremely large size, but also because of his very unique story.

His name is Clarence, a 95-year-old, 550-pound Galapagos tortoise, and he has played an important role in helping his species avoid extinction. 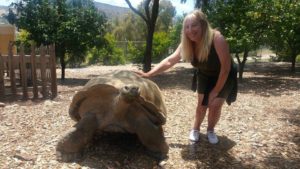 Inside the zoo, students in the Exotic Animal Training and Management program at Moorpark College know of Clarence’s story and basically treat him like sort of a celebrity.

He often gets walks, albeit very slow ones. He is fed well, eating many of the tortoise’s favorite foods including prickly pear cactus and flowers. He even has a big red ball to play with. 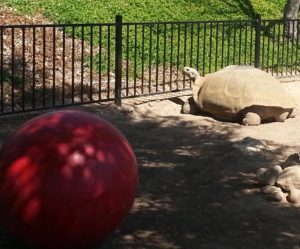 He also sometimes gets special treats such as watermelon. The zoo even threw him a big birthday party for his 90th birthday. See his birthday party story in the Ventura County Star here.

It’s a far cry from the fate Clarence and his tortoise pals faced back home on the Galapagos Islands, the “Isles of Tortoises” when he was born in 1923.

The Galapagos Islands, about 600 miles west of Ecuador on the west coast of South America, was once home to a great number of gigantic, yet peaceful land tortoises.

Their numbers were about 250,000 in the 16th century. But that changed when early navigators and whalers discovered the islands.

“All mariners adventuring that way during the seventeenth and eighteenth centuries loaded their decks with tortoises and proclaimed their excellence in all seas where ships sailed,” Townsend wrote. “Then came the fleets of whalers of the nineteenth century, British and American, to gather the rich cetacean harvest of the Pacific. The abundant and long-celebrated tortoises of the islands offered a fresh food supply of which they hastened to avail themselves.” (You can read more about his findings here.)

Townsend estimated that only few tortoises were left on the islands during the first decade of the 20th century. Those that were left had barely a chance at survival since predators hunted the remaining tortoise eggs and the baby tortoises that survived were usually eaten by wild dogs.

As part of a New York Zoological Society mission to save the species in 1927, Townsend sailed to the Galapagos Islands to find and brought back as many different species of tortoises he could to North America.

Townsend ended up taking back 108 tortoises, including Clarence, who was just a wee little boy of 4 years old.

The tortoises, including Clarence, ended up at zoological parks and aquariums, where they had the ideal environment to breed.

The Houston Zoo was Clarence’s first home before he was moved to the Los Angeles Zoo.

Unfortunately, Townsend didn’t see the results of his efforts. He died a year before the first tortoise in captivity was born at the Bermuda Zoo and Aquarium in 1945.

Because of the conservation efforts, the tortoise population continued to grow. There were about 3,000 tortoises living in the 1970s, growing to about 19,000 at the start of the 21st century.

Many young captive-bred tortoises (offspring from those in captivity such as Clarence) have been returned to the islands, and ten of the original 15 species now survive in the wild, though the species as a whole are still classified as  “vulnerable” by the International Union for Conservation of Nature.

In 2001, the Los Angeles Zoo indefinitely loaned Clarence to the Moorpark zoo to be cared for by the EATM students.

Because Clarence is only considered middle age in tortoise years (their average lifespan is 200 years), Clarence should enjoy many more years at the zoo being treated as the special hero he is! 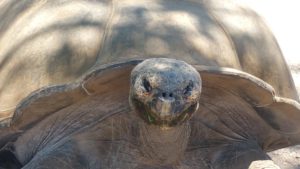 You can visit Clarence when the zoo is open to the public from 11 a.m. to 5 p.m. on weekends, excluding holidays.  More information: http://zoo.moorparkcollege.edu.

And while you’re there, make sure to check out all the zoo animals, including many of Clarence’s reptilian friends, including a leopard tortoise named Little Joe, an African sulcate tortoise named Tremor, and a two-pound ornate box turtle named Tilly! 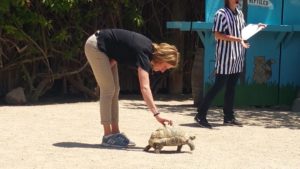 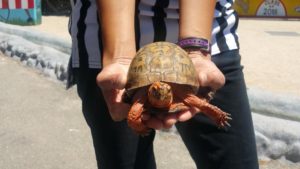