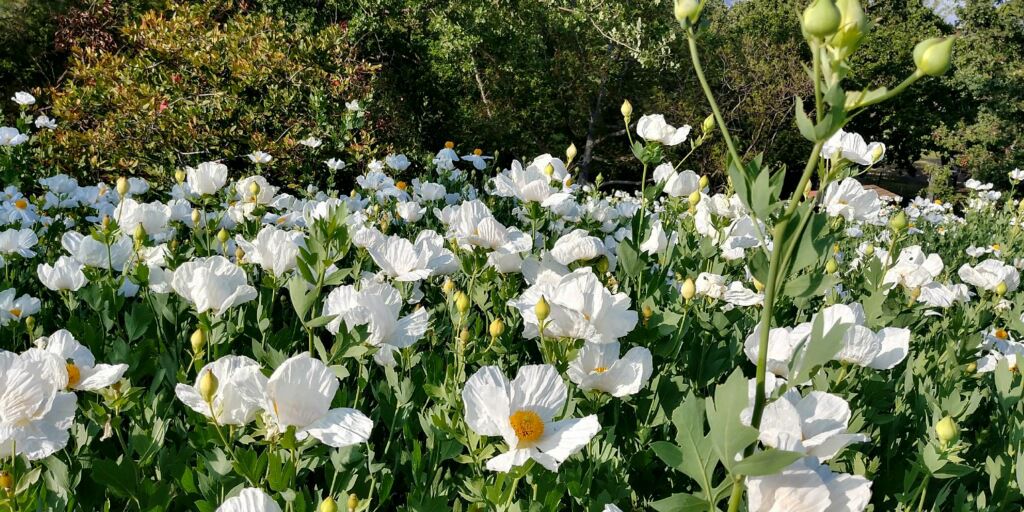 After a brief delay, the very popular Matilija poppies are in full bloom at the Conejo Valley Botanic Garden in Thousand Oaks!

The garden presented its annual Matilija Poppy Festival on April 29, but the flowers weren’t quite blooming yet in time for the celebration.

“I think the weather has an impact, I’m sure to a certain extent. Unfortunately Mother Nature’s schedule and our schedule don’t always coincide,” Bill Dobner, master gardener and botanic garden volunteer, said while leading a walking tour at the festival.

Dobner recommended visitors to come back, and sure enough, we were pleasantly surprised to see hundreds of the showy, white Matilija poppies in the garden. The flowers bloom typically from May throughout the summer months.

“They’re quite spectacular. It looks like a fried egg. It has a great bloom,” Dobner said about the perennial herb. 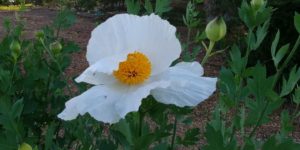 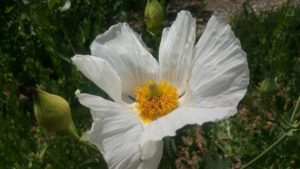 A little bit about the Matilija poppy:

The Matilija poppy (Romneya coulteri) is native to Southern California, and the botanic garden is just one of many places that you can see the flower bloom in the area. The plant actually grows from the Sespe Creek Drainage in Ventura County, south to Temescal Canyon, and into Baja, Calif.

The plants can grow very tall–up to eight feet, and the flowers are the largest of any plant (up to nine inches)!

The flowers are truly unique–with crinkly, white petals and a center cluster of yellow stamens (hence, why they are referred to as the “fried egg flower”).

The story behind the Matilija poppy is equally unique and beautiful.

The Cahuilla, a Native American people of the inland areas of Southern California, used the plant in many ways, including medicinally for skin and gum problems, and upset stomach. They also drank the yellow liquid found inside the stalk.

Legend has it that the poppy was actually named after Chief Matilija of the Chumash tribe, who was said to have lived in the hills and valleys of Ventura County during the early 1800s.

“We grew up hearing about Chief Matilija and his group of warriors who tried to fight off the ever-present armies. In the myth, the story goes on to tell of Chief Matilija’s daughter, Amatil, who was very much in love with the handsome warrior, Cocopah. Tragically, he was killed in the final battle. Amatil’s love was so deep and so pure that she she laid upon her lover and there she died. What remained of that love was a beautiful flower with pure white petals symbolizing their love and a yellow center to represent the everlasting brilliance of their love.. We know this flower as the Matilija Poppy.”

The Matilija Canyon, north of Ojai, is named after the Matilija poppy, which the flower is believed to protect the grave of Amatil.

Fun fact: The Matilija poppy was nominated for the honor of California state flower in 1890, but the California poppy won the title.

At the botanic garden, the flowers can be found in the garden entrance, service area, up the service road, and at the top of the hill. They are definitely a must see, along with all the other beautiful plants and trees at the garden.

There are also educational and informational signs and posts throughout the garden that are easy to follow. 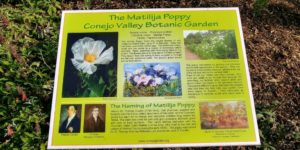 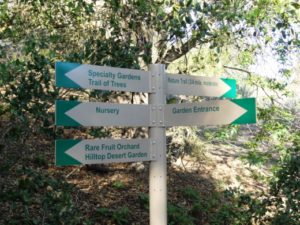 There is no entrance fee at the 33-acre garden, located at 400 W. Gainsborough Rd.

The main garden is open daily from sunrise to sunset. Located inside is a Kid’s Adventure Garden, which is open 11 a.m. to 3 p.m. only.