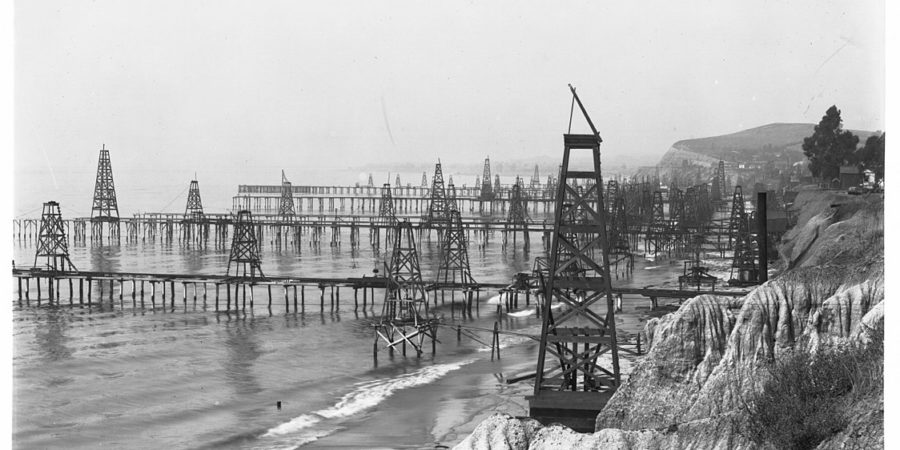 Witnessing the beauty of the Pacific Ocean is by far one of the greatest pleasures while driving on Highway 101 to Santa Barbara.
It often seems unfathomable that at one time, that beautiful coastline was once covered with oil wells as early as the turn of the 20th century. (The photo is oil wells in the Santa Barbara Channel in Summerland circa 1900-1903.)

On Jan. 28, 1969, an oil well off the coast of Santa Barbara owned by Union Oil and referred to as “Well A-21,” blew out, spewing more than four million gallons of oil and killing thousands of marine animals and wildlife in its wake.

Robert H. Sollen, a news reporter for the Santa Barbara News Press, was reporting at the time about oil leakage in the ocean from the various wells.
In the recently-released documentary film about Earth Day called Better Together, Sollen recalled how even then Santa Barbara was very protective and proud of its coastline.
“And the phone rung and I picked it up. Somebody simply said the ocean is boiling off Santa Barbara and then he hung up. I have no idea who it was half a century later.”

Today, the Santa Barbara oil spill ranks third in size after the 2010 Deepwater Horizon spill in the Gulf of Mexico and the 1989 Exxon Valdez spill in the Prince William Sound, Alaska.

Shortly after the disaster, Santa Barbara became a battlefield for conservationists. More than 100,000 signatures were collected on petitions calling for an end to offshore drilling. The cause was carried across the nation.
It also sparked activists to protest, the creation of environmental organizations, and the passage of environmental regulations.
When Wisconsin Senator Gaylord Nelson viewed the 800 square-mile oil slick, he decided to ratify a national day dedicated to environmental education, called Earth Day.

On April 22, 1970, over 20 million people attended the first Earth Day, holding teach ins and gathering. The result: President Nixon established the Environmental Protection Agency, and a bi-partisan Congress adopted the Clean Water Act, the Coastal Zone Management Act, and Endangered Species Act.
For the first Earth Day in Santa Barbara, a one-block long gathering was organized by the Community Environmental Council in Santa Barbara. Today it continues on as the annual Santa Barbara Earth Day Festival with thousands of participants.

Organizers of this year’s Earth Day anticipated throwing a big event to celebrate the 50th anniversary, but the COVID-19 pandemic and subsequent quarantine changed those plans.
But that hasn’t deterred the CEC, who are instead hosting the #TogetherWeEarthrise Earth Day Live Festival to gather for inspiration, community building and climate action.
The event begins at noon on Wednesday, April 22 and is available to view at SBEarthDay.org.

The documentary Better Together by director Isaac Hernandez is being screened at the Earth Day Live Festival.
The film shows how 50 years ago, the Santa Barbara oil spill united a community and ignited the international environmental movement, including the creation of Earth Day.

For archival photos and other articles about the 1969 spill: https://sbearthday.org/history