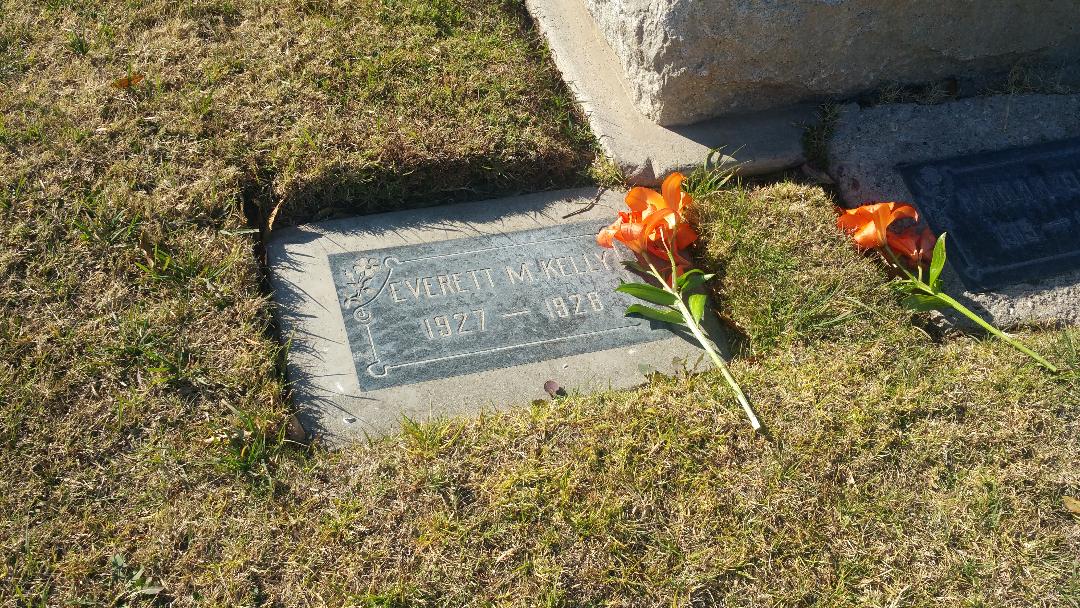 It was three minutes before midnight on March 12, 1928, and 3 1/2 -month-old Everett Kelley was inside his home in Fillmore, CA.

About 10 miles north of Everett’s home, the St. Francis Dam, built as a water storage reservoir for Los Angeles, catastrophically failed and sent a wall of water down the Santa Clara River.

Within minutes, the resulting flood made its way through Fillmore, Bardsdale, Santa Paula and neighboring towns, destroying everything in its path as it moved towards the Pacific Ocean.

It took the lives of more than 400 people, including Everett, his mother Ida, 28, his brother Harold, 9, and his sisters Phyllis, 7, and Dolores, 4.

It was the second-greatest disaster in California in terms of loss of life. Many victims were never found.

I learned about Everett and his family when I discovered the Bardsdale Cemetery by accident about 20 years ago while driving (and getting lost) through the roads in Fillmore.

This beautiful cemetery, surrounded by hillsides and fruit orchards, has many graves dating back to the 1800s and featuring many names familiar to the surrounding community.

As I walked around the cemetery, I noticed many of the graves had 1928 as the death date.

Next to his marker was his mother and siblings’ grave sites also with the same date: 1928. Seeing the graves of practically an entire family who died on the same date was very unusual and quite upsetting. (Note: Everett’s last name on his marker is spelled Kelly instead of Kelley, but records show he is from the same family.)

I was curious about what happened on this date, and went home to research it. Much has been written about the St. Francis Dam disaster, so it didn’t take long to learn why this date was so prevalent in the cemetery. After learning about the disaster, I made a trip to San Francisquito Canyon to see where the dam once stood.

In the years since I first visited Bardsdale Cemetery, I found sparce information about the Kelley family (and I have been unable to track any known surviving family members).

In the book “Floodpath,” author John Wilkman writes that Everett’s father, Hezediak Kelley, lost his leg in an accident two years prior to the dam disaster. When the flood hit his home, he was still able to climb to safety with his artificial limb while holding the youngest of his five children in his arms. Since only four children from the Kelley family are listed as deceased in records, could Everett have had an even younger sibling (perhaps a twin) who is still alive?

Ann Stansell, a CSUN graduate student, wrote her master thesis on the memoralization of victims of the dam disaster, and included a poem written by William Miller, a neighbor of the Kelley family. The poem, published in the Fillmore American on March 22, 1928, spoke about the loss of Everett’s sister Phyllis and her “bonnie blue” eyes and gold hair.

On the Web site www.SCVhistory.com, Everett Kelley is listed as still “missing.” While not confirmed, his marker at Bardsdale Cemetery may be a memorial in his memory, not an actual grave site.

I revisited Bardsdale Cemetery last week after hearing about the 90th anniversary of the dam disaster and wanting to pay my respects to the Kelley family by laying flowers on their graves.

While I was there, I met the manager of the cemetery, Doug Basolo, whose grandfather Georgie was also killed in the dam disaster and is buried there.

I learned from Basolo that Everett wasn’t the only young disaster victim. He pointed out a memorial for mother Maria Carrillo, and her eight children, who were also killed. The youngest daughter, Marcela Carrillo, was only two months old when she lost her life. (The memorial is in Spanish and partially reads: “In memory from your husband and your daughter who said goodbye to you with screams of pain and sorrow for having encountered in that sorrowful hour of death on the 13th of March 1928.”)

There were many more young victims of the St. Francis Dam disaster, too many to list here.

The dam disaster didn’t discriminate with its victims. It took all, no matter your age, ethnicity, social status. The anniversary is once again a reminder of how they were senselessly killed by an engineering failure, which possibly could’ve been prevented.

I will never forget about little Everett Kelley. While he died too soon, he didn’t die in vain because it was through him that I (and perhaps many others) learned about this tragic event and how we should never take for granted the life we are fortunate to have.

A candlelight memorial will be held March 12 in Santa Paula. Fillmore will also be unveiling a plaque honoring those who died on March 17. More information: www.saintfrancisdam.com.

1 thought on “The littlest victims of the St. Francis Dam disaster”